The God – The Youth

Posted on July 7, 2014 by themagickalpen 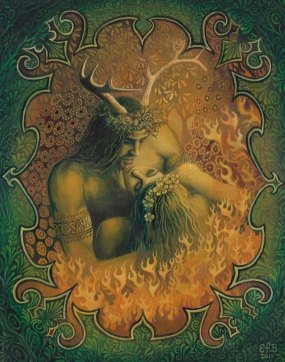 The God in his form as the Youth correlates to Dawn. This is the energy of the renewed cycle of Light and the birth of the God at Winter Solstice heralds the waxing light half of the year. Hope abounds and the God as sun-child carries into the world the spark of flame that will grow stronger with each passion day, as does he.

The Dawn begins the day offering its energy to begin the process of what will mature and expand as the light increases and the hours pass. So too the God grows quickly and with confidence as he becomes the King of the greening Oak. As the bearer of the spear of Lugh this youth proves his prowess and all that is within his aim is pierced by the impetuosity of youth.

The God grows in strength and so does the power of his light to quicken what now lay within the bounty of the Earth Goddess. His is the greening that calls to life the young animals and his is the face that lay camouflaged in the buds of spring green leaf.

When we think of the God as the Youth we envision the boldness of the young man, the sexual appetites and fecundity of the young buck and the confidence and virility to make his own what he most desires. His is task of becoming companion and eventually consort to the Goddess who has now also renewed and transformed into the vessel that is the Maiden that will consummate the Divine Union that joins them as one.

His are the strong arms that hold you passionately within his fiery embrace. His is the union of ecstasy that calls you to him in reminder of your own passions of youth and desire. His is the phallus whose seed generates new life that will come to term within the belly of his lover as they become Father and Mother.

The Mystery of the God

The Father
The Sage

Robin Fennelly is an Elder within The Assembly of the Sacred Wheel Tradition and also serves as High Priestess of Coven of the Mystic Path. She teaches and facilitates classes for the Pagan Experience Study Group that serves as foundation for membership within Coven of the Mystic Path. Her spiritual journey is strongly rooted in both Eastern philosophy and theWestern Magickal systems from which she has formed a core foundation that is diverse in knowledge and rich in spiritual practice. A life-long learner, her practice has evolved from the classical and philosophical teachings of books, practical experience and enrichment of this knowledge base by attending workshops of various spiritual traditions presented by master teachers. Robin formally came to the Wiccan path in 1994. Following practice as a solitary for 2 years, she dedicated to Oak and Willow Coven of The Assembly of the Sacred Wheel Tradition in November of 1996. She received her 1st, 2nd and finally 3rd degrees within the Assembly Tradition. As a teacher of esoteric and magickal studies she has used Energetic Anatomy, Tarot, Astrology, Hermetic Qabala, Eastern Philosophy, and Numerology as the foundations of her diverse selection of workshops and writings for more than 25 years. Exploration of varied energetic protocol has been the focus of her work for some time now and the information gained through direct experience informs all of her magickal and spiritual work. Robin’s writings have been featured online, and in print Internationally. She has authored several books incorporating her unique style of writing making use of poetry, prose and pathworking to enhance the concepts presented. She has taught extensively throughout the Pagan community, including Sacred Space Conference, Spring Magick, Between the Worlds Interfaith Conference and Free Spirit Gathering Festival this Summer. Her most recent project is hosting an online blogging community entitled The Pagan Experience. Robin is the owner of Holistic Embrace providing services for mind, body and spirit such as Tarot readings, Astrology reports, Spiritual Guidance and other related offerings. She lives in Eastern Pennsylvania and her life is blessed by a 43-year marriage, five children and the opportunity to work in the field of public education. Robin's esoteric writings can be found on her blogs.
View all posts by themagickalpen →
This entry was posted in YAD-Lesson Three, Year and A Day Course and tagged Dawn, Deity, God, passion, Solar Cycle, The Youth, Wicca Course-Lesson Three, Year and A Day. Bookmark the permalink.

3 Responses to The God – The Youth